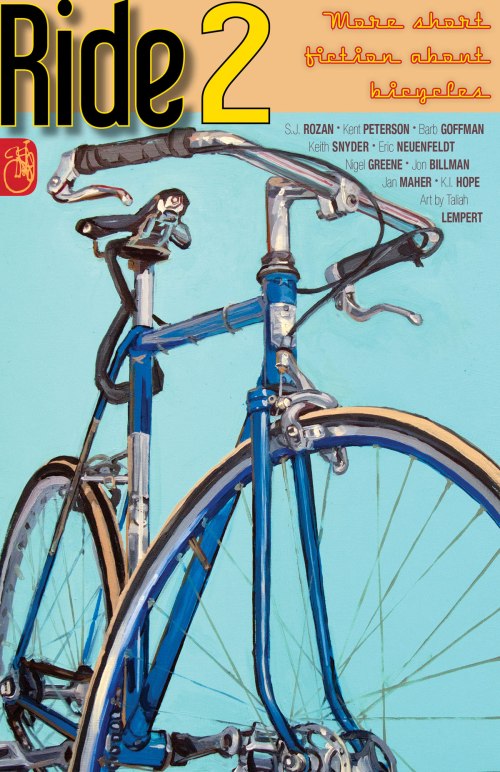 Cross-posted at the RIDE blog.

IT DIDN’T OCCUR to me, when I decided to use this “Three Questions” game to say what I liked about each story, or why I’d chosen it, that I would eventually come to my own. Instead of telling you how great it is, I’ll tell you something I learned.

The first RIDE anthology (mumble mumble purchase mumble) was my first stab at being an editor and publisher. One of my mistakes was in sending Advance Reading Copies to reviewers when everything was almost perfect—except for my own story, a novelette called “Night Ride.” The cover did say UNCORRECTED PROOFS, after all, which people would know meant there was still some hammering and sawing going on, and I was thinking of the book as a team effort, which implied there was a team for me to take one for. People were trusting me, and if tasks had to fall undone before the ARCs had to go, it was only fair if most of them fell into the bucket with my own name on it. So I sent the ARCs out.

And then I minded.

Not as much, though, as I’d have minded being that guy who sends a string of “Wait, I uploaded a new version!” emails.. So I stuck Don’t ship the ARC before your story is as polished as all the other ones in the “lessons learned for next time” column, along with Don’t publish the ebook and the print book at different times and Don’t miss the holiday sales window.

Those last two…well, RIDE 3, I’ll do better. But “The Rambler, Part 1” was nice and shiny before the first review copies of RIDE 2 went out. And—yeah, it’s a poem. It rhymes. I was reading Chaucer in the tub on my iPad, and I saw that he was heavy on the plot and light on the closely observed moment, and I went I can do that! I can not observe stuff!

…up through Harlem, onto Broadway; picking
out his silhouette, they weave to follow,
sticking tight past Jimmy Jazz, Apollo,
Duane Reade, Rite Aid, Popeye’s Chicken,
toward the river, tires quicken
toward the bridge that goes to Jersey.
If he’s caught—there’ll be no mercy.

Barb: In “The Rambler, Part I,” your rider is using his bike as a means of escape, literally. Have you ever raced away from someone on a bike, trying to avoid them?

But in 2010, I was severely underemployed and emotionally shredded, so I was riding longer distances. One was a 400K that went through the Pine Barrens at night.

The overnight portion of a brevet can be physically and emotionally difficult; you’re fatigued, it may have been a while since your last real food, you’ve had several imaginary but not entirely silent confrontations with the most obtuse people of your acquaintance, and your metabolic thermostat has sprung its coil. You can’t remember why you thought this was a good idea, your car is fifty miles away, and there’s no train and zero bars on your phone.

Brevet routes tend to be designed to put you on smaller highways and mountain roads as much as possible, both to reduce the number of cars you’ll encounter and because stoplights bleed your average speed more than you’d think. (Well, stopping at them does, anyway.) So depending on route, season, weather, and velocity—I’m slow—you can end up in unlit desolation for long stretches of time, able to see only as far as your headlight beam, utterly blind to the sides and rear. 4am isn’t just the best time for an army to attack, because the other army is at its worst; it’s also when a dirty, discouraged randonneur (or frozen, or drenched; we do this in all weather) can’t see the point of this anymore.

The Pine Barrens are a forest shot through with cranberry bogs. There are no streetlights because there is almost no night traffic, and there are no stars except those directly overhead, because the pine trees snuff them out in all directions. On this night there was no moon, either, and an overcoat of clouds over whatever stars had escaped the pine trees. I could see the highway in front of me well enough to think every stretching shadow was a pothole, but the portion of beam higher than the road didn’t do anything but collude with every reflective highway sign to blow out my vision and hint at an ever-moving wedge of distant black foliage.

But you can hear things in the cranberry bogs.

I don’t know species, so I classify them all by size. That soft crackling and crunching, very soft, everywhere, is the the local insect biomass stumbling over thousands of tiny twigs, falling off leaves, dropping into ponds. Briefer, more directional little snaps and dull creaks are your beefier bugs and possible birds. Next larger: definite birds—woodpeckers, the occasional confused rooster—and continuing up the size scale are your random small mammals, trotting coyote, bored, leaping deer, the isolated shapeless thing skulking across the highway.

And to my left, the deep, leathery flap of something huge in the air, rising off a dirty water surface. There’s a creek, or a bog, or a flooded ditch off the highway there, because the rising thing’s feet drag on liquid as its wings beat. It gains altitude ponderously, amassing momentum, its hot weight coming even with me, then rising above eye level—and my panic has flooded me with so much strength, I can barely get my fumbling fingers on the shifters.

Once identifiable as little rocks, gravel has become dim streaks beneath my pedals. I’m maintaining barely enough self-mastery to not flub a shift and grind my non-precision budget drivetrain. Hair surges on my neck and forearms—the luxurious wingbeat is closer, the dense black body gliding in the humid black air; my butt’s bouncing because I just outran my gearing. The highway floats ahead in a few dozen feet of bulbous gray light. A few inches behind my saddle, the floating glow of a deep red coal—the brightest taillight on the Internet—is beacon and rangefinder for anything that wants to strip my nerves from my meat.

There’s a deep bovine growl three feet from my ear, a hot snort on my cheek. I’ve just whimpered and my legs are spinning faster than the gears can accept, and I don’t know what gear I’m in, so I shove a shift lever in my blind panic, and there’s a cling! and a thrrrrrip!; my pedaling legs flail against nothing, and I understand that the chain has come off.

A single blast of warm air into my face and through my helmet vents, and thick leather wings and a whip tail clip the topmost antumbra of my headlight, as I grab my handlebars and fight to keep from crashing; I stutter-step with one foot a few times because I can’t remember how to unclip the other one and I stand alone shaking, the flashbulb impression of a massive bat ray still fading in my retinas, and up in the depth of night, something smashes the tops of the invisible pines.

Barb: Is there anywhere in the world you would like to explore on a bicycle but haven’t been able to? If so, where and why? And what’s holding you back?

Keith: There aren’t that many places I wouldn’t like to. In some alternate universe, I have no family and one of these. In that same universe, its bushings never fail, and my witty, self-deprecating accounts of adventures through a smorgasbord of terrains and cultures are the most fascinating things that happen near the onion dip at parties of A-list literati; but this never happens. So let’s just keep things as they are.

Barb: What’s your most embarrassing or funny biking story?

Keith: FCO (Failure to Clip Out) in front of Princess Grace of Monaco. She pretended not to see, but we both knew.

LIKE YOU’VE NEVER read Chaucer in the tub on your iPad.