I’m leaving this up because I wrote it and meant it. However, I’ve learned more since then, so I can’t stand behind it. There may be another blog entry coming—not sure yet.

END_OF_DOCUMENT_TOKEN_TO_BE_REPLACED 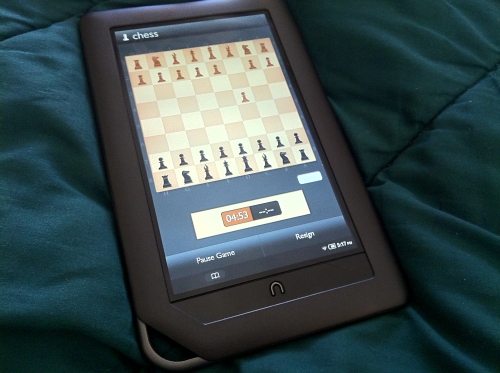 BECAUSE I BOUGHT a Nook Color a month ago, it was lying on the bed.

Because it was lying on the bed, a child picked it up and pushed some buttons.

Because he pushed some buttons, he saw a single-player chess app.

Because they didn’t get bored taking turns with the single-player chess app, I bought them a chess set and a chess book.

Because they requested it, they now get a section from the chess book and a game every night at bedtime, instead of a story. 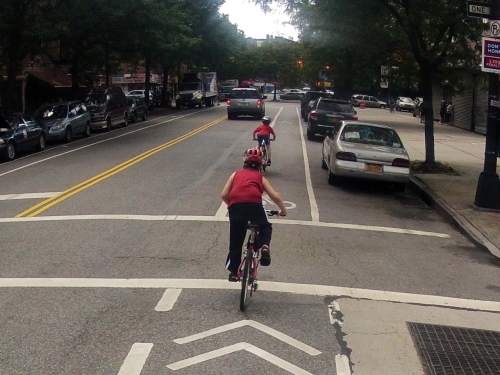 Because we ride bikes, we get up to Isham for the Inwood greenmarket most Saturdays. It’s .6 miles. We wouldn’t walk it, and the subway or bus would cost $9.

Because the boys have a new travel chess set I got them so they could play on the bus after swim class, they brought it today and set it up where kids run around.

They explained the game to a new opponent and attracted an audience of kibitzers.

BECAUSE THEY’RE SO fixated on chess, and because we ride bikes to the Inwood greenmarket, and because bikes engage you with your surroundings instead of isolating you from them, they zeroed in on two men playing chess while we were riding past on Seaman.

Because Inwood has an active Twitter population, I knew one of the players by reputation.

“They can play!” offered the man I’d recognized.

So we braked and walked our bikes over. 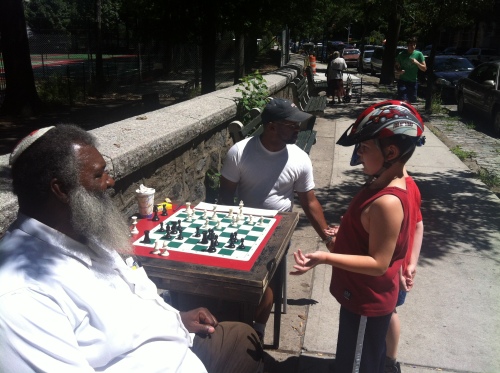 The men welcomed them, talked to them, challenged them, and taught them the game of Pawns.

They, in turn, cracked one of the men up when I said, “Hey guys, tell him our name for en passant,” and the boys yelled in unison, WHACK ’IM WHILE HE’S RUNNING!

After two games of Pawns, the boys played chess, with much better kibitzing than they’d had at the greenmarket, and I learned that Sundays, they set up multiple tables for whoever wants to play and actively help kids with the game. I also learned the man I was talking to had ditched his cigarette as the boys came up. They don’t want to teach that. Just chess.

Because it was all so cool, I forgot to take pictures.

Then because the whiny hungry crabbies had arrived, we said thank-you and rode home.

I got a Nook Color.

Therefore life has gone in a completely unforeseeable way.

My Father’s Day present was a gift certificate from Tread. I got a GoPro camera.

We tried it out this weekend.

A maturing relationship with Pyrex

WE HAVE THIS lousy Pyrex saucepan.

It has three problems. The two most obvious are the bileous mulberry hue it casts on food and its passive-aggressiveness in pouring. But those are just physical things. If I loved it, I could get past them; no pan is perfect. But there’s something more subtle, which I find much harder to deal with:

It doesn’t show its emotions.

WE ALREADY KNOW how hard it is to know what’s going on inside other people. We have slogans for it: Don’t compare your insides to other people’s outsides; You never know what someone else is going through; Be kind, for everyone you meet is fighting a hard battle. But it’s something we don’t always think of when we relate to cookware. For the most part I’m glad all that heat and conflict stays inside the pot—but I’ve been thinking how impossible it is for a Pyrex saucepan to understand that all anyone else can get a grip on is its handle.

Which, regardless of maelstrom or meltdown in the pan, remains at room temperature at all times.

Cold, says anybody who holds the pot. That’s right, I don’t.

ANOTHER THING ABOUT this saucepan is that—violently and with very little warning, as though it suppresses and suppresses and suppresses and saves up and saves up and just can’t anymore! and FOOM!—the seething stuff boils over, unexpectedly, while it’s over a LOW FLAME, if you can believe it, and then if you grab the burner and turn it down, or yank the pot off the stove, it just KEEPS GOING, eructations of oatmeal all over the stove and the floor, which it does not apologize for and does not volunteer to clean up.

I HOVER WHEN my kids use it, waiting for the moment when it takes a shot at their confidence. You did everything right, I told one of my boys today after I grabbed it off the burner while he was whisking. It’s not you, sweetheart; it’s the lousy pot. You didn’t do anything wrong. This pot—you just shouldn’t trust it. It’s just a bad pot. You can’t tell what’s going on with it until it’s too late.

Yanking it off the burner doesn’t work. Giving it a little more care and attention doesn’t work. Lowering the heat doesn’t work. By the time it gets to the point where you can see what’s about to happen, it’s sucked up so much energy that a second later, it’s already erupting. You can’t stop it. You can’t soothe it. You just have to wait until it’s done spewing.

What did you expect? says the pot.

Well by now, I expect that.

LIFE GETS MUCH simpler when you accept your cookware for what it really is, and let go of what you wish it was. Especially when it keeps showing you. Especially when your kids are getting old enough that they’re starting to learn to judge temperature themselves, and you don’t want to confuse them.

Much simpler, that is, unless you’re the cookware.

In which case your life’s going to get harder as soon as the economy improves a little more.

Filed under Being a grownup, Cooking, Family, Fatherhood, Favorite, Food, Safety, Whatever